January 06, 2012
Having read Dr. E. Paul Zehr's Becoming Batman...I was thrilled when asked to review Inventing Iron Man. I guess superhero ideology runs through my veins.  Between the two books, this one seemed more readable.  How cool would it be if you could fly?

My review is enclosed. Feel free to leave comments.

Nonfiction
Review by Steven King, MBA, MEd
Sometimes, when making an emphatic point to students, a teacher’s best intentions do not always accomplish what he thinks they should.  As an unashamed Batman devotee, once upon a time I made a passing reference to the greatness of The Dark Knight as a prelude to one of my lessons.  Prior to delving into the world of mathematics with this group of high school students I said something akin to, “Just imagine—a mere man who became a tremendous superhero.  No one could be as great as Batman.”  Without missing a beat, one of the students in the middle of the class piped up, “Have you ever heard of Iron Man?”  With tongue-in-cheek, I told him I did, but I would only award extra credit for receipt of Batman paraphernalia.
As comic book denizens will know, Iron Man is the invention of Tony Stark, a 30-something genius inventor who inherited Stark Industries from his father at the tender age of 21. Prior to that, at age 15 his penchant for brilliance took him to the Massachusetts Institute of Technology where he would earn two college degrees: one in physics and the other in engineering. On the most recent Forbes Fictional 15, his net worth of $9.4B places him at the number six slot – two spots above the much more conservative true identify of Batman, Bruce Wayne (Whose $7B net worth is still nothing upon which to sneeze.).  Incidentally, he is right behind #5 Jed Clampett (The Beverly Hillbillies), but oil inheritance and country living doesn’t sell any comic books.
Dr. Paul Zehr answers my former student’s query with an insightful analysis about the Golden Avenger. His Inventing Iron Man: The Possibility of a Human Machine pulls back the curtain to determine the plausibility of such an endeavor—actually constructing a fighting machine such as the one popularized by Tony Stark in the comic book series.
Zehr’s analysis is compelling as he seeks to establish the credibility of   In the course of his narrative he scrutinizes such topics as:
As I read this account, I found Zehr’s development of neuroprosthetics particularly intriguing.  Given his doctoral work in neuroscience, he has the uncanny ability of avoiding strained technical jargon in favor of skillfully leading the novice through what would otherwise prove to be a cerebral quagmire. One learns that Iron Man’s suit would have to have been an advanced brain-machine interface that merely augmented the neural (and physical) abilities of its wearer.  As Mr. Stark even said, “I am The suit and I are one.”
Previously, I had the privilege (and pleasure) of reading Dr. Zehr’s Becoming Batman.  Contrasted with this work, his writing seems to be much freer and more comfortable—giving the reader an insightful, yet thoroughly enjoyable look into the possibility of becoming
Perhaps authoring a few books about superheroes implies that Dr. Zehr has a hidden desire to offer an elective course in their mythos at the University of Victoria, British Columbia.  Inventing Iron Man is not merely a scientific work, it also includes plentiful illustrations and frequent comic book quotes to keep Iron Man fans interested.  An appendix detailing milestones in Iron Man’s development rounds off this work before Zehr’s inclusion of an impressive bibliography for those seeking additional information.
Highly commended to all who enjoy a look into the world of superheroes—but science nerds will like it, too.
Zehr Iron Man comics neuroscience Batman book review science experiment

Popular posts from this blog

Books about spirituality intrigue me.  As a Christian, I will admit that I have a very strong faith and I am resolute in my beliefs.  A long time ago, I endorsed the ideology that purports: if you want to know the other camp--you should read what they do. Be careful "where" you look for spiritual advice. Opening such doors could cause you quite a bit of aggravation...after all, you never know what you might find. Happy Friday, -Steve Comments welcome. Spirit Junkie, A Radical Road to Self-Love and Miracles By Gabrielle Bernstein 288 pages, $23.00 ISBN-13: 978-0307887405 Non-fiction Review by Steven King, MBA, MEd Spirit Junkie, A Radical Road to Self-Love and Miracles is destined to be a best seller since so many impressionable people are clamoring for spiritual direction in their lives.  If anything will do, then quite possibly such people are willing to fill the void in their lives with anything that comes along.  Its author, Gabrielle Bernstein, believes she has fo
Read more

Book Review: "Get Out of That Pit" by Beth Moore 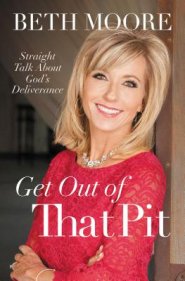 Who has not experienced living life and suddenly feeling beat down by one’s circumstances? The feeling that your feet are stuck in miry clay, and, no matter what your effort you never break free. You feel as if you have fallen into a pit and cannot get out. There is no comfort in the pit; rather the continual reminder that you are stuck. Into this common reality, Beth Moore’s Get Out of That Pit breaks through with alacrity that is certain to resonate with the sullenest pit dwellers. Her message is one of both hope and deliverance – a way to break free of the pit.  Relying upon a recent event of deliverance in the Psalmist’s life, Moore culls her thesis from Psalm 40 [NET]: 1 I relied completely on the Lord, and he turned toward me and heard my cry for help. 2 He lifted me out of the watery pit, out of the slimy mud. He placed my feet on a rock and gave me secure footing. 3 He gave me reason to sing a new song, praising our God. From a biblical expositional point of vie
Read more

Review of " TURNAROUND: A Six-Month Plan for Change"

September 20, 2017
TURNAROUND: A Six-Month Plan for Change Charles S. Ricks Seagull Publishers ISBN: 978-0-9835883-5-1 98 Pages (Includes front and back matter) Thomas Jefferson once opined, "Nothing can stop the man with the right mental attitude from achieving his goal; nothing on earth can help the man with the wrong mental attitude." In an era where the need for change is often invoked as a panacea to return to a foregone era, few set out to actually make significant change.  Rather, many are happy to pay mere lip service to the idea of change but invariably settle numbingly into their routine.  Life becomes drudgery through the slough of despond where ideologues lament the status quo and are powerless to do anything about it. Dr. Charles S. Ricks has written a compelling short work to help people pull themselves up out of the miry clay and actually change their lives for the better.  His TURNAROUND: A Six-Month Plan for Change is not filled with gooey epithets intended
Read more